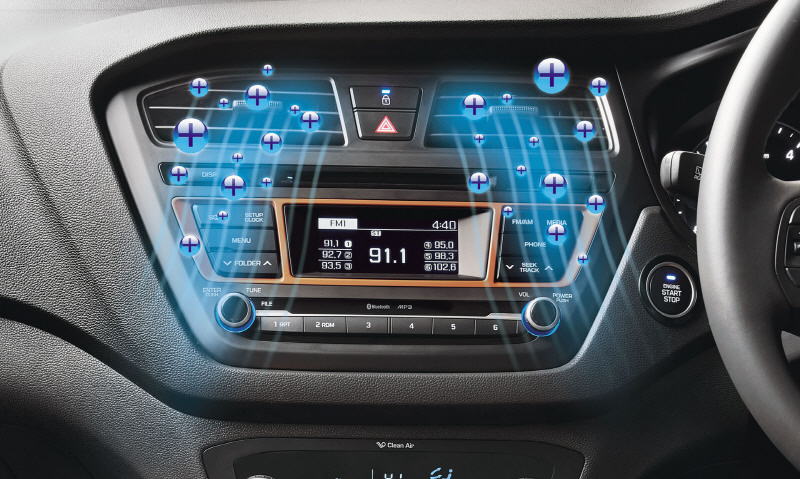 In recent years, the demand for technology to clean the air to a clean and comfortable environment in the interior of the vehicle is increasing. Conventionally, for purifying the indoor air of the vehicle, and then sucks the air by discharging the air through the filter to generate a flow of air circulating in the air cleaner is designed to continuously collect the floating matters in the air is widely used as a filter.

However, the suspension contains bacteria floating in the air and a small amount of fine particles, fungi and E. coli than the pores of the filter it is not possible to remove these substances alone filter. In particular, the bacteria multiply in a state trapped in the filter, it is difficult to expect a sufficient effect to be obtained because only the filter returns to the interior of the vehicle with the flow of the circulating air.

For the recent removal of the bacteria by using a filter of an antimicrobial material but obtain a comfortable vehicle interior space, in practice a situation could not obtain a satisfactory effect.

Recently been proposed by the cluster ion generator and the plasma ion generator in order to solve this problem has been operating the air conditioner is installed in a vehicle.

(In the art, normal “cluster ionizer” shall also known as the load) from the cluster ion generator is a device that generates positive and negative ions by a high-frequency oscillation. Positive and negative ions are generated by ionizing moisture in the air by a high-frequency oscillation, form a plurality of water molecules attach around hydrogen ions (H +) or oxygen ions (O 2-), that is, in the form of cluster ions . Ions are discharged into the atmosphere is set around the suspended particles, causes a chemical reaction with each other, form the active species as hydrogen peroxide (H 2 O 2) or hydroxyl radical, to perform an oxidation reaction for removing hydrogen from the floating particles, and disable the suspended particles, bacteria and sterilize the wealthy.

It is discharged into the above-described air purifying a target space is performed by ions of the function which spreads over the entire space, and these ions are to be that they act on and move the odor molecules and harmful molecules to odorless and harmless to sterilize bacteria in suspension to act on, to obtain a satisfactory purification effect over the entire target area. Moreover, the cluster ions discharged into the space in nature and harmless to the human body and because the ion is converted to H 2 O (water) by oxidation reaction, there is no possibility that the cluster ions cause environmental pollution.

It has been put into practical use to date homogenizer EO cluster, which are known in the literature or normal ferrite (ferrite) material in the center of the secondary coil for generating a high voltage for the primary and the core is provided with a high-frequency oscillation, these coils and the ferrite material between the core is a soft epoxy as insulating filler for the purpose of insulation between the coil is impregnated. Patent Document representative thereof to Korea Utility Model Registration No. 20-0378008 (deungrokgwonja Co. winikseu, the invention of the name “ion generator”) can be mentioned.